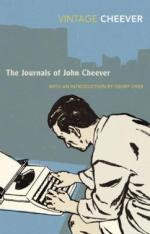 “He meant by his writing to escape his loneliness, to shatter the isolation of others.

I recall him telling me he had received a thankful letter from a man who had read the novel in which Coverly Wapshot dreams that he has had sex with a horse. The passage had relieved this admirer of some burden of anxiety; it had lessened his loneliness. This pleased my father immensely. So he meant with the journals to continue this process: he meant to show others that their thoughts were not unthinkable.”